Part One: The Mystery

The image at the top is impossible.

But … it appeared as an official hurricane promo for MSNBC last week – specifically, for the approach of “Crazy Ivan.”  The promo ran on the network most of the day and evening, .

Then, after a few hours, it was mysteriously removed ….

What caught my eye (as I had the TV on in the background, tracking the storm) was the suddenly obvious, incredibly regular geometry in Ivan’s central “eye” – the core region containing the highest sustained winds, and around which the rest of the several hundred-mile-wide hurricane was organized (below).

To the remarkable “hexagonal/pentagonal” cloud structures that the Voyager and Cassini spacecraft had captured circling the north poles of Saturn and Jupiter ... during their brief fly-bys several years ago (below)! 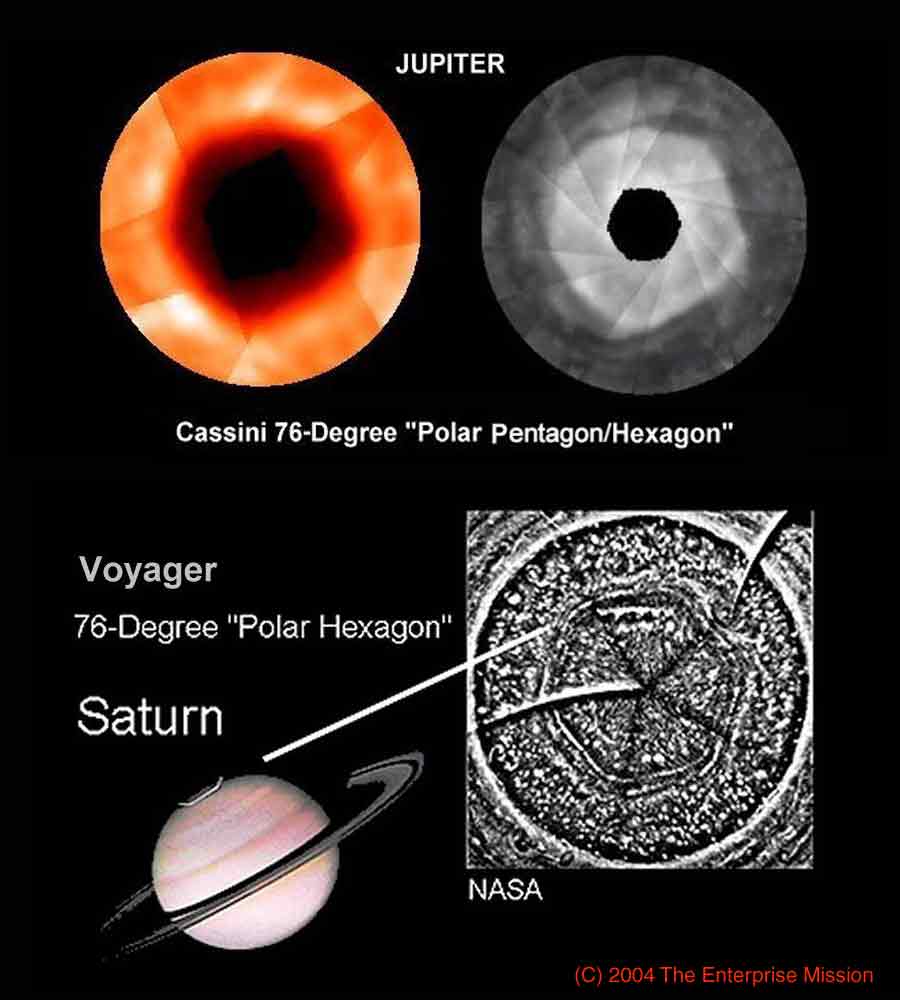 These planetary examples have long been elegant confirmations of our Hyperdimensional Physics Model for the entire solar system: that rotating mass, by virtue of the nature of space and “multi-dimensional reality,” is able to “open a gate” into another, more energetic dimension … allowing that energy to cascade -- in a highly organized and geometric form – “down” into our dimension.

But, in our Model, those “hyperdimensional signatures” -- on the two most massive planets in the solar system -- are formed across literally tens of thousands of miles … by the slow, ponderous rotation of an entire planet -- “sucking” energy into the planet from the “surrounding” hyperspace, which subsequently appears as a large-scale organizing force in the planetary polar weather systems.

That the same hyperdimensional geometry could appear literally billions of miles closer to home – and in the center of a terrestrial hurricane -- was startling ... and immediately raised profound questions and fascinating further implications ….

Seeking the official Government source for this astonishing Ivan imagery, I naturally turned to NOAA (sometimes called “the wet NASA” -- the National Oceanic and Atmospheric Administration).  NOAA displays the daily output on its dozens of websites of, among other spacecraft, a veritable “fleet” of “stationary” GOES weather satellites, watching our planet “24/7’ from 22,300 miles out ....  If the network ran the promo all day on the 10th, I calculated, they must have used the most recent NOAA daylight imagery from the previous afternoon – as the “eye” was clearly under afternoon illumination in the “loop.”  That meant the images had to have been collected on the afternoon of the 9th… or, from an earlier afternoon that same week.

As expected, when I looked, the striking Ivan “eye” geometry was NOT present on any geosynchronous archived NOAA imagery from the 10th.   But, when I looked in the expected archive for the 9th, I was confronted with another puzzle: a conspicuous “gap” in the Ivan “special products” for that date.  Close-up Ivan imagery from September 9th was curiously … missing.

At this point, confronted with amazing network hurricane images that seemed to have “no official source,” some of my colleagues at Enterprise (like David Sadler -- representative of a growing number of Americans who, according to the polls, increasingly distrust “big media” …) began to mumble words like “fake” ... and “fraud” -- on the part of MSNBC!

Having once worked for a couple of television networks, and having colleagues still within the industry – such as Cheryll Jones, a former anchor at CNN, and the only women to hold that position and to have a degree in meteorology at the same time – I brought up our deepening “Ivan mystery” with Cheryll.  After seeing the amazing Ivan video, she agreed with me that it was far more likely that the some nameless MSNBC producer had just “grabbed” this amazing footage from some official NOAA source … and simply slapped the network logos on it.

My daunting task was to find the original footage … “hiding” somewhere in plain sight … somewhere … in the highly complex and proliferating labyrinth of  “government weather and environmental websites.”

“Orbit” is privately maintained by Steadman and his readers -- a fascinating site which provides updates on a variety of unexpected environmental phenomena, including hurricanes.  It was there, after an e-mail tip from one of our Enterprise associates, that we confirmed at least the physics behind Ivan’s remarkable geometry -- in the form of a sourced previous NASA hurricane image (below -- note URL, top left).  The photo was taken almost exactly one year before Ivan – on -- and featured another Category 5 hurricane approaching the , named “Isabel.” 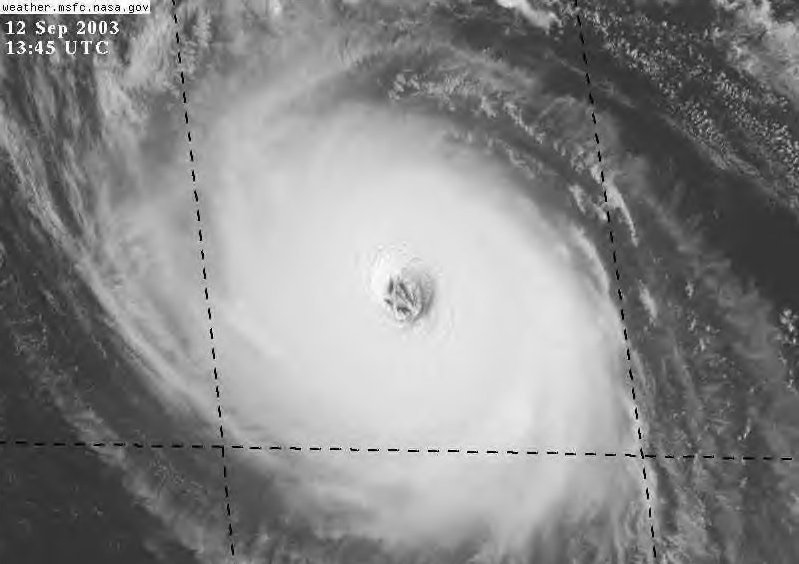 There, in the center of Isabel, was another pentagonal “eye” ….

An search quickly turned up additional official imagery of Isabel’s bizarre geometry – such as this one (below) from the NASA-Marshall Space Flight Center.  Taken a few hours after the previous GOES image (above), the new view revealed “evolving eye geometry” – precisely what one would expect in a “fluid dynamics situation” if the forces involved in geometrically ordering the hurricane’s central thunderstorms was being created by some kind of “changing hyperdimensional influx” – which, remember (in the HD Model), cascades into our dimension in a highly structured form.  This flux could then be modulated by a Category 5 hurricane’s variable rotation rate, thus creating the changing regular interior geometry with time …. 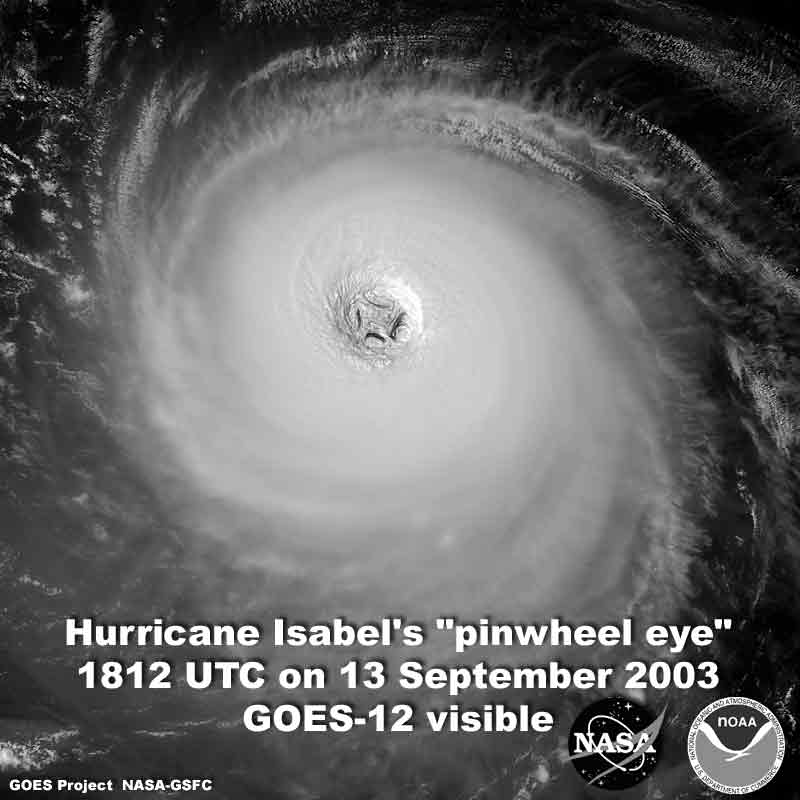 Further digging turned up even more wondrous Isabel imagery, such as this shot taken at Universal Time, on -- from another NOAA “special products site” (below). 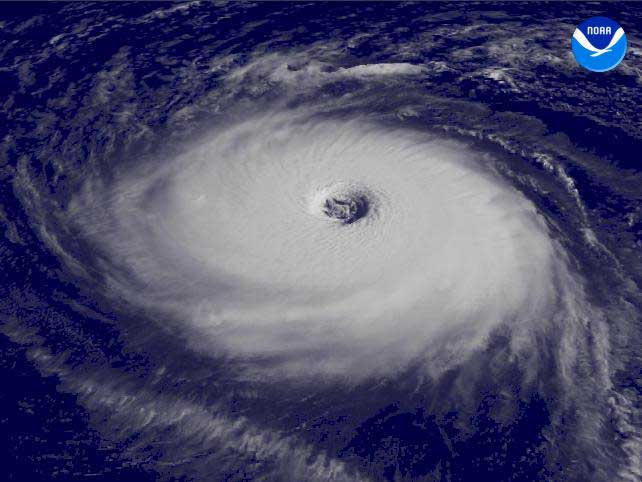 There was no doubt now that a Category 5 hurricane could demonstrate stunning “hyperdimensional geometry”; Isabel had provided ample evidence.  But—

Where was the official Ivan imagery – which, according to the promo run on MSNBC, had revealed the same HD geometry?!

As I continued my search through the complicated NOAA archives – bolstered now by the unquestionably official geometric evidence from Isabel -- I suddenly noticed another item on the “Orbit” website.  It was something totally unconnected to the search for imagery -- a link to an international website tracking seismic activity (earthquakes) around the world -- that no one probably would have even looked at twice.  But, it suddenly demanded my attention, because—

During Ivan’s trek across the , a Magnitude 6 earthquake had apparently taken place – at Universal Time, – exactly the same timeframe in which I was seeking official visual evidence supporting Ivan’s hyperdimensional activity.  The epicenter of the underwater quake was located at 17.86 degrees north, 81.55 west – near the … with Ivan at the time only a few hundred miles away … and heading directly for the epicenter (below)! 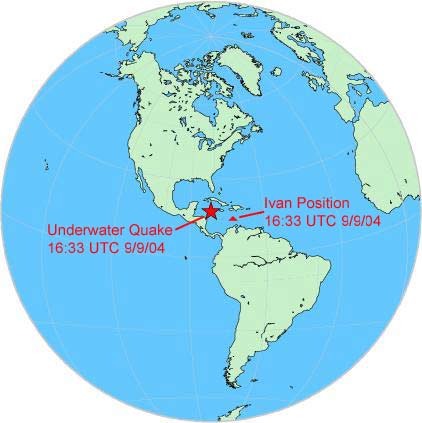 Could the two events have been connected?

If hurricanes above a certain rotational wind velocity (>155 mph – Category 5 -- on the Saffir-Simpson scale) could exhibit the obvious “hyperdimensional signatures” officially now recorded in Isabel (and according to MSNBC, in Ivan a year later) -- what would the geological effects be in their vicinity?  Could the approach of such a vast, rapidly rotating atmospheric system create “seismic side-effects” underground in already weak formations ... through the same “hyperdimensional energy influx” which formed (in our hypothesis) the water vapor “signature geometry” seen in Isabel’s and Ivan’s clouds ..!?

Back to Home Page